Many of us Clashers fight for a spot on the top of the leaderboards and the chance of immortalizing our name, declaring ourselves a true champion/victor. However, none of this can ever come to be unless we have a viable defense capable of withstanding constant bombardment from attackers, all with the same goal of being the best. We not only need a powerful attack strategy, but also need a strong and durable defense.

This is a page in which you can see good layouts which that may be able withstand against aggressive attacks. In addition, if you have defensive strategies that will help people, we recommend that you post them here instead of the You page.

Remember the new Wall Breaker will not be affected by spikes (spiking) unless there is a structure directly behind the wall; this is the only exception in which the Wall Breaker will go for the spike instead of the main wall.

In addition, Wall Breakers have a larger blast radius, so they can penetrate through two layers of walls.

Defense Against the Updated Wall Breaker

Add a photo to this gallery 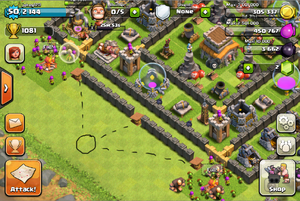 In the update the Wall Breakers now target walls that enclose Buildings; this means they ignore and go around free-standing walls. Updated Wall Breakers don't just go to the nearest wall; instead they go to the nearest compartment. Use this to your advantage by channeling them into gaps, where your carefully laid Traps can instantly kill them. This method can also help defend against other Troops, such as Giants. In addition, the more time the Wall Breakers (and other Troops) spend moving and not attacking, the more opportunities your defenses have to kill them.

Base layouts can be divided into two basic commonly used categories: Symmetrical and asymmetrical. Most bases have some amount of symmetry, whether they are partially, bilaterally or quadrilaterally symmetrical; others are bilaterally mirrored. They can be further divided by their basic defensive concept. Here are a few:

It is a good idea to have your outer walls upgraded to at least level 7 to slow down your invading enemies. This is the point at which a single Wall Breaker cannot destroy it, regardless of the Wall Breaker's level.

What to Put Inside Your Walls and Why

What NOT to Put Inside Your Walls and Why

Other Wall Info
Obstacles (trees, bushes, stones, etc.) cannot be used as walls or barriers! Troops can be placed directly on top of them, in front of them, or behind them! The same goes for Decorations (flags, torches, etc.) and Traps (Bombs, Spring Traps, etc.) and even Hidden Teslas. None of these (with the exception of Hidden Teslas, which are hidden buildings) actually have hit points like your buildings do either. Neither do they count as building space when you're under attack (even the Hidden Teslas, until they are revealed). For example, if you have a large area of at least 3x3 with only decorations or traps within that area, enemy troops can be placed directly into the area where those Decorations, Traps or Obstacles are during an attack on your village.

There are many different types of bases that you can make in Clash of Clans and it is vital that you make a well designed base for the job that you want it to do.[1] There are therefore a few fundamental rules that you must follow in order to achieve a good design.

Whatever base layout you choose to make, always look back afterwards and think how you would defeat your own base. Ask yourself how you can improve it. Remember that there is no such thing as the perfect base; you just need to prioritize what you want. Also, try out each base type and see which works best for you.

Town Hall 5 and Below

Retrieved from "https://clashofclans.fandom.com/wiki/Layouts/Home_Village?oldid=460604"
Community content is available under CC-BY-SA unless otherwise noted.