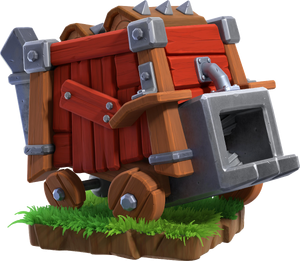 "While the Log Launcher certainly isn't the fastest or the sturdiest, it is definitely among the meanest. The trunk-throwing contraption pummels everything in front of it with endless logs to open up a path to the enemy Town Hall. Immune to spell effects."

*The Log Launcher deals point-blank damage at the same time it releases a log. Structures and units within a small radius (?? tiles) of the Log Launcher when it launches a log take this damage. The 4x damage multiplier against Walls also applies to this secondary attack.

Retrieved from "https://clashofclans.fandom.com/wiki/Log_Launcher?oldid=565525"
Community content is available under CC-BY-SA unless otherwise noted.