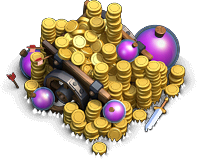 A broken down Loot Cart appears in your Village after every defense! Collect this cart to recover some of your lost resources!!

Gold/Elixir in the Overloaded Loot Cart

Retrieved from "https://clashofclans.fandom.com/wiki/Loot_Cart?oldid=563457"
Community content is available under CC-BY-SA unless otherwise noted.