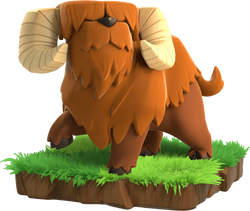 "Built like a Siege Machine, the Mighty Yak has a knack for knocking down Walls it comes in contact with. It also flies into a rage if you knock out its companion."

Retrieved from "https://clashofclans.fandom.com/wiki/Mighty_Yak?oldid=574400"
Community content is available under CC-BY-SA unless otherwise noted.