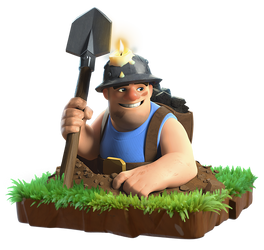 "These sneaky shovelers burrow underground, pass beneath walls and pop up right next to their targets. While underground, Miners cannot be damaged and will not trigger traps, but still gain bonuses from Spells."

Retrieved from "https://clashofclans.fandom.com/wiki/Miner?oldid=535067"
Community content is available under CC-BY-SA unless otherwise noted.