For a similar Builder Base Troop, see Beta Minion. 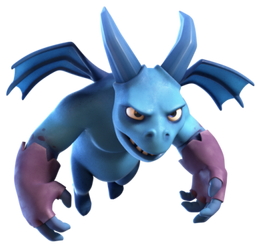 "This terror of the skies was born out of Dark Elixir. Undetectable by the Seeking Air Mine, Minions materialize with ease, but are fragile in our world."

Retrieved from "https://clashofclans.fandom.com/wiki/Minion?oldid=568080"
Community content is available under CC-BY-SA unless otherwise noted.