For a similar building in the Builder Base, see Multi Mortar. 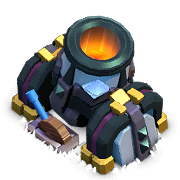 "The Mortar can mow down hordes of enemies by the splash damage from its shell. Don't let enemies get too close to it!"