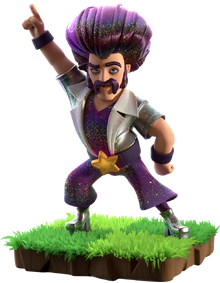 "The distant echo of a kick snare or a high hat can only mean one thing: the Party Wizard is making his grand entrance. Dropping phat beats and massive fireballs, he's the soul of post-battle celebrations."

Retrieved from "https://clashofclans.fandom.com/wiki/Party_Wizard?oldid=540895"
Community content is available under CC-BY-SA unless otherwise noted.