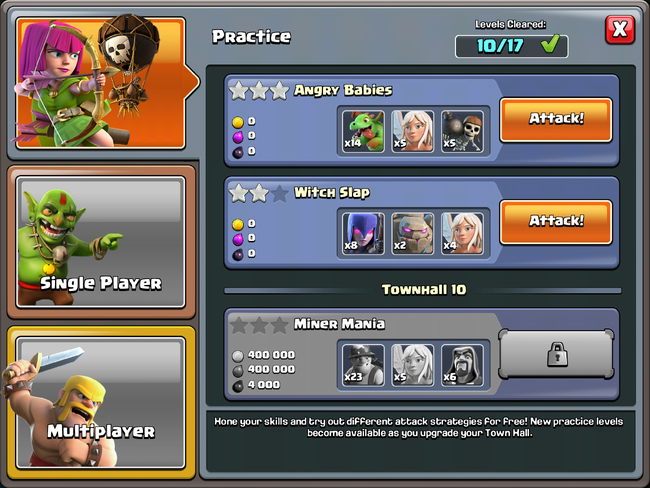 Practice Mode is a feature allowing the player to try out various attack strategies. Each strategy has a preset level.

Like the Single Player Campaign, no Trophies are won or lost, and there is also no time limit. Players get to keep any loot they stole, while no loot bonuses are awarded.

Unlike in the Single Player Campaign, the player does not need to train troops for each level; instead an army will be given for each level. Any heroes provided for the practice level do not affect your own heroes in any way.

Also, since the Practice Mode is used for practicing multiplayer battles, each base is a possible player base at that Town Hall level, unlike the Single Player Campaign, where levels can contain buildings and traps with higher amount or level than a player base of the same Town Hall level. However, since the Practice Mode has no time limit, some attacking strategies in Practice Mode are impractical against player bases (notably those strategies involving Queen Walk that cause the attack to last more than 3 minutes).

At the first attempt at each Practice Mode level, a player will be given a tutorial which is a step-by-step guide to performing the attack; players will be told when and where to deploy each unit, or when to perform a certain action such as activating a hero ability. This tutorial can be skipped and subsequently re-triggered again if the player so desires.

Currently there are 17 Practice Mode levels.

This level focuses on attacking with massed Balloons.

This level takes the concept of Giants acting as meat shields, which take the heat from defenses and allow other more vulnerable units like Wizards to do damage.

Meat Shield is the third level in practice mode that contains an army of 14 Giants, 8 Wall Breakers, 16 Wizards, and it introduced spells into practice mode with 2 heal spells. All these units are level 3. The level has you deploy 1 giant to shield the wall breakers from attack, not unlike the strategy in the earlier level Giant Smash. Then it has you deploy the remaining 13 Giants in order to start your main attack on the base. After the Giants pass through the wall it has you place the first heal spell down so that your Giants don't die when targeted by the Wizard Tower. Next, it has you place 2 groups of 5 Wizards parallel to each other but on separate sides of the base in order to destroy buildings. Third to last, it has you place the remaining Wall Breakers to target the second layer of walls and to open a path to the Townhall. Then, they have you place 6 more Wizards. Finally, the tutorial has you place a heal spell to keep the Giants alive so the can destroy the remaining defenses.

This level introduces the strategy of attacking with massed Dragons.

This level introduces the strategy of attacking with Hog Riders.

This level showcases the Balloonion strategy - attacking with Balloons and Minions.

Air Raid is the sixth level in practice mode and the final of three levels for Townhall 7. The army consists of 30 level 4 Balloons, 25 level 2 Minions, The Barbarian King level 5, and 3 level 4 rage spells. The level starts with the tutorial instructing you to place 2 groups of 15 Balloons to destroy the 2 Air Defenses. Next, it has you place a rage spell on each of the groups in order to help the Balloons become faster and deadlier. Then, it has you place the Barbarian King, and the Minions in order to take down the Wizard Tower and to help clean up the base. Finally it has you use the Kings ability and drop the final rage spell on the Minions so that they are faster and can destroy buildings faster.

This level showcases the GoWiPe strategy - attacking with Golems, Wizards and P.E.K.K.As.

This level showcases the GoWiVa strategy - attacking with Golems, Wizards and Valkyries. It also introduces the player to defensive Clan Castle troops (in this case, 5 level 5 Balloons) and how to defeat them.

This level introduces the player to the Lavaloon strategy - attacking with Lava Hounds and Balloons.

This level introduces the player to using Baby Dragons and Queen Walks - the latter being a useful offensive tool consisting of the Archer Queen and Healers.

This level showcases the Witch Slap strategy - a strategy primarily consisting of Witches backed by Healers.

This level introduces the player to attacking with Miners.

This level introduces the player to P.E.K.K.A BoBat, a powerful attack strategy consisting of P.E.K.K.As, Bowlers and Bats from Bat Spells.

This level expands on the Lavaloon attack strategy, specifically using a ground attack as a first phase.

This level introduces Electro Dragons and their uses surgically (as in deploying them in precise locations).

This level reintroduces mass Dragon attacks, but beginning with a ground stage.

Bane of The Ring

Retrieved from "https://clashofclans.fandom.com/wiki/Practice_Mode?oldid=548780"
Community content is available under CC-BY-SA unless otherwise noted.