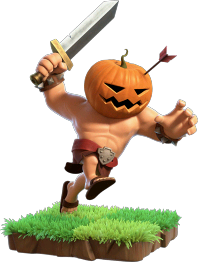 "Who would've thought that pumpkins make for good makeshift armor? The pumpkin helmets provide these regular Barbarians some extra hitpoints until they get destroyed."

Retrieved from "https://clashofclans.fandom.com/wiki/Pumpkin_Barbarian?oldid=562353"
Community content is available under CC-BY-SA unless otherwise noted.