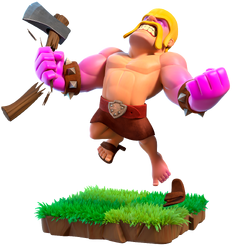 "Why is he so angry, speedy, and vicious? Nobody's brave enough to ask. Maybe it's because he can't find his sword?"

Retrieved from "https://clashofclans.fandom.com/wiki/Raged_Barbarian?oldid=564726"
Community content is available under CC-BY-SA unless otherwise noted.