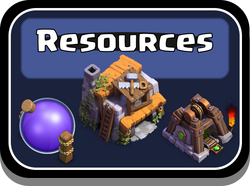 These resources have buildings that are used for storing and generating them, except for gems which has no building for storing them.

Builder Gold is a resource that is dug up by the Gold Mines on the Builder Base. Once collected it is stored in your Gold Storages. Its usage is similar to regular Gold, but is used on the Builder Base instead of the Home Village.

Retrieved from "https://clashofclans.fandom.com/wiki/Resource_Buildings/Builder_Base?oldid=537333"
Community content is available under CC-BY-SA unless otherwise noted.