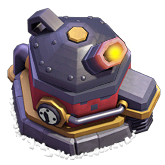 "Bathe foes in a fiery flood of scalding plasma! Both air and ground troops will feel the burn!"
Gold Pass modifiers

*These damage per second values are seen in-game and are approximations; it does not necessarily do this much DPS if it cannot utilise the full potential of its bursts.

Retrieved from "https://clashofclans.fandom.com/wiki/Roaster?oldid=562047"
Community content is available under CC-BY-SA unless otherwise noted.