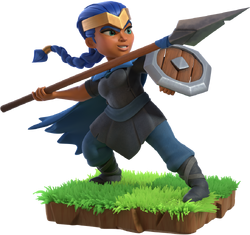 "Over the walls and at them! The Royal Champion is only afraid of four things, and the enemy isn't one of them. She attacks with her spear at short range and throws her shield to take down defenses once her Seeking Shield ability is unlocked!"

The below table denotes the months in which Royal Champion skins were available. They are typically only obtainable by reaching the final tier of Season Challenges after purchasing that season's corresponding Gold Pass.

Retrieved from "https://clashofclans.fandom.com/wiki/Royal_Champion?oldid=565294"
Community content is available under CC-BY-SA unless otherwise noted.