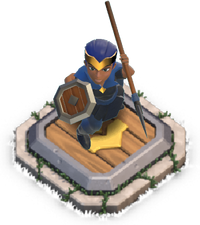 "The Royal Champion is a hardened veteran of many battles, armed with fast reflexes and a fast mind. That is, she often attacks before thinking and gets herself into a pickle."

Input Gold Pass boost to modify the statistics in the tables below accordingly
Retrieved from "https://clashofclans.fandom.com/wiki/Royal_Champion_Altar?oldid=564857"
Community content is available under CC-BY-SA unless otherwise noted.