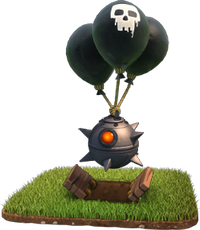 "Is it a bird? Is it a plane? Well it makes no difference as the Seeking Air Mine will blow it sky high. This trap does devastating damage to a single air unit."

Input Gold Pass boost to modify the statistics in the tables below accordingly
Retrieved from "https://clashofclans.fandom.com/wiki/Seeking_Air_Mine?oldid=576504"
Community content is available under CC-BY-SA unless otherwise noted.