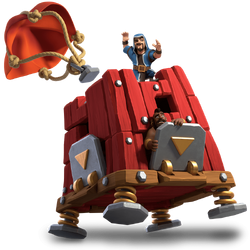 "The Siege Barracks parachutes down gracefully to first release a menagerie of P.E.K.K.As and Wizards and then the Clan Castle troops. How they all managed to squeeze inside is a mystery not really worth investigating."

Retrieved from "https://clashofclans.fandom.com/wiki/Siege_Barracks?oldid=565174"
Community content is available under CC-BY-SA unless otherwise noted.