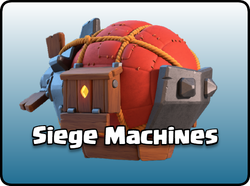 Siege Machines are special weapons created in the Workshop that carry your Clan Castle troops. Each type of Siege Machine offers a unique method of transporting and deploying your reinforcements during your attacks.

It is destroyed when it either successfully completes its objectives, or when it is damaged excessively by defenses, or when it is ordered to do so by the player. Upon being destroyed, the Siege Machine releases the Clan Castle troops housed within it.
Retrieved from "https://clashofclans.fandom.com/wiki/Siege_Machines?oldid=566435"
Community content is available under CC-BY-SA unless otherwise noted.