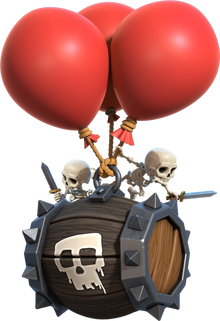 "Is it a bird? Is it a plane? No, just Harry, Larry, Terry and a dozen friends, heading for the nearest building in a barrel of bones!"

*The "level" column is the numeral level shown in-game, while the "tier" column is for purposes of clarity between different Town Hall levels, which have different statistics. Tier counts from the lowest usable level.

Retrieved from "https://clashofclans.fandom.com/wiki/Skeleton_Barrel?oldid=563160"
Community content is available under CC-BY-SA unless otherwise noted.