For the base version, see Goblin. 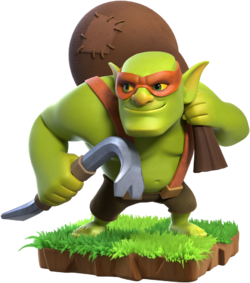 "Sneaky Goblins have a talent going unnoticed for a while after being deployed. It's usually the incredibly loud sound of resources being pilfered that gives them away."

Retrieved from "https://clashofclans.fandom.com/wiki/Sneaky_Goblin?oldid=575818"
Community content is available under CC-BY-SA unless otherwise noted.