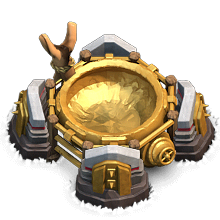 "The Spell Factory is home to veteran Wizards who are better suited to creating magical weapons than front-line combat. Use their powerful Attack Spells to turn the tide of a battle in your favor!"

Input Gold Pass boost to modify the statistics in the tables below accordingly
Retrieved from "https://clashofclans.fandom.com/wiki/Spell_Factory?oldid=573961"
Community content is available under CC-BY-SA unless otherwise noted.