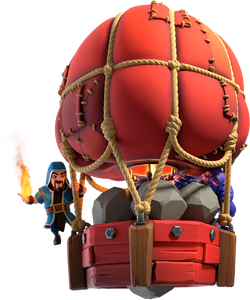 "The Stone Slammer is a heavy-duty, flying mountain that targets defensive buildings by flattening them with giant boulders and causes earthquakes. Immune to spell effects."

*This second hitbox does its maximum damage for all targets within 2 tiles of the impact, and minimum damage for targets just within the splash zone of 3 tiles. The hitbox also does x25 damage to Walls.

Retrieved from "https://clashofclans.fandom.com/wiki/Stone_Slammer?oldid=569733"
Community content is available under CC-BY-SA unless otherwise noted.