For the base version, see Barbarian.
For a similar Builder Base Troop, see Raged Barbarian. 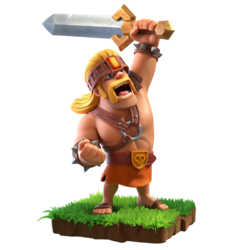 "Superior in health, power, speed and most importantly, hair, the Super Barbarians are what regular Barbarians dream of becoming!"

Retrieved from "https://clashofclans.fandom.com/wiki/Super_Barbarian?oldid=575372"
Community content is available under CC-BY-SA unless otherwise noted.