For the base version, see Giant. 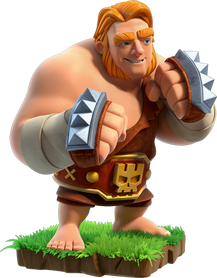 "Super Giants are bigger than their ordinary cousins and are great at punching their way through walls. The belt is from the annual village eating contest."

Retrieved from "https://clashofclans.fandom.com/wiki/Super_Giant?oldid=575428"
Community content is available under CC-BY-SA unless otherwise noted.