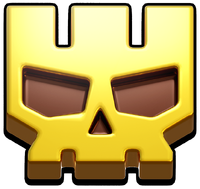 Super Troops are troops that are more powerful troops than their original counterparts and have special abilities. You can boost the original into their Super Troop counterpart with Dark Elixir once you have reached Town Hall 11 and have their level requirement reached.

Super Troops take up more housing space than their normal counterparts; their training time and cost are mostly increased proportionally.

Retrieved from "https://clashofclans.fandom.com/wiki/Super_Troops?oldid=556946"
Community content is available under CC-BY-SA unless otherwise noted.