For the base version, see Wizard. 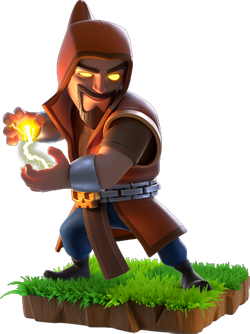 "Super Wizard is positively charged with magical energy! He's either the smartest person in the room... or else he blows the whole room to bits."

Retrieved from "https://clashofclans.fandom.com/wiki/Super_Wizard?oldid=575246"
Community content is available under CC-BY-SA unless otherwise noted.