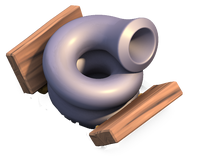 "Wind and stones may break some bones, but this trap will definitely confound you. Just place one of these traps down and the released vortex will draw the enemy troops in, hindering their progress."
Gold Pass modifiers

Input Gold Pass boost to modify the statistics in the tables below accordingly
Retrieved from "https://clashofclans.fandom.com/wiki/Tornado_Trap?oldid=565040"
Community content is available under CC-BY-SA unless otherwise noted.