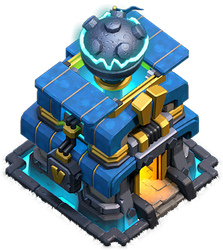 "Your enemies are in for a big surprise with the Giga Tesla, the foul-tempered big brother of the Tesla family. When an enemy so much as scratches the paint on your Town Hall, sizzling Electrickery will blast them away leaving the air tasting faintly like coconut... and metal."
Gold Pass modifiers

Input Gold Pass boost to modify the statistics in the tables below accordingly
Retrieved from "https://clashofclans.fandom.com/wiki/Town_Hall/Giga_Tesla?oldid=565772"
Community content is available under CC-BY-SA unless otherwise noted.