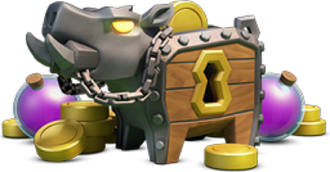 "Clan War and Star Bonus loot is greatly protected inside the Treasury. Increase Treasury capacity by upgrading the Town Hall and through Clan Perks."

If you choose Resources from Clan Games, the amount is a certain percentage of the Treasury capacity.

Retrieved from "https://clashofclans.fandom.com/wiki/Treasury?oldid=552964"
Community content is available under CC-BY-SA unless otherwise noted.