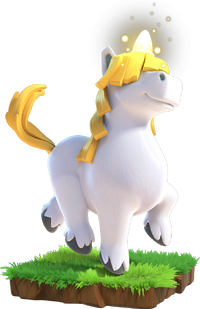 "Unicorns have severe trust issues, but overcoming them with love and patience is totally worth it. They'll heal up any minor or major scrapes as well as any Healer!"

Retrieved from "https://clashofclans.fandom.com/wiki/Unicorn?oldid=574464"
Community content is available under CC-BY-SA unless otherwise noted.