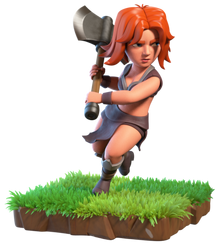 "A master of the two-handed axe, this glorious warrior runs between nearby buildings and can shred several troops or buildings at once with her whirlwind blow!"

Retrieved from "https://clashofclans.fandom.com/wiki/Valkyrie?oldid=565358"
Community content is available under CC-BY-SA unless otherwise noted.