For a similar Builder Base Troop, see Bomber. 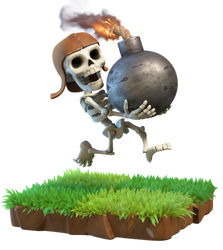 "Nothing warms a Wall Breaker's cold and undead heart like blowing up walls. A squad of them will make way for your ground units, and they will do it with a BANG!"

Retrieved from "https://clashofclans.fandom.com/wiki/Wall_Breaker?oldid=576359"
Community content is available under CC-BY-SA unless otherwise noted.