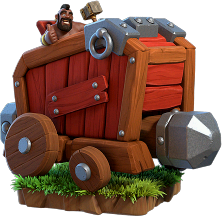 "The Wall Wrecker exists for two simple purposes: smash through anything that it comes across and deliver the Clan Castle troops straight to the heart of the village. Built from heavy-duty materials, it can take a pummeling before breaking down. Immune to spell effects."

Retrieved from "https://clashofclans.fandom.com/wiki/Wall_Wrecker?oldid=576427"
Community content is available under CC-BY-SA unless otherwise noted.