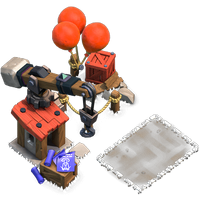 Tapping this icon boosts your troop and Siege Machine training, spell brewing and hero regeneration for 1 hour, reducing the time by a factor of four for the duration of the boost, at the cost of one Training Potion. This icon is only shown if you have at least one Training Potion.

Retrieved from "https://clashofclans.fandom.com/wiki/Workshop?oldid=550929"
Community content is available under CC-BY-SA unless otherwise noted.