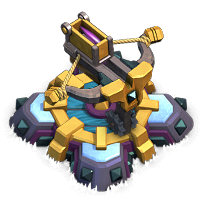 "The X-Bow shoots mystical bolts with terrifying power. Load it with Elixir and the X-Bow works automagically. You can set it to target ground units at long ranges, or all targets at reduced range."